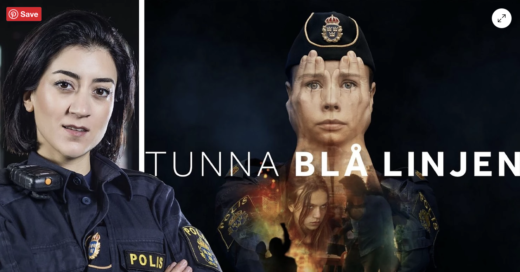 We don’t often do TV theme tunes but this one is very atmospheric and got me straight away, and there’s an interesting story behind it to boot.

First off, the musician. Irya Gmeyner is an artist, composer and producer known for her expressive, suggestive music and colourful voice, with over 20 years of music experience as a touring and recording artist with several indie bands. She is also known for her collaboration with t

he contemporary circus company Cirkus Cirkör as singer and composer for several of their international shows. She also performs under the name April Snow and has collaborated with Ane Brun.

Her music has been used in numerous U.S. film and TV series like 90210 Beverly Hills, The Neighbours (not the one set on Ramsay Street), Wet behind the Ears, Vendetta and Wynonna Earp. She’s also been writing for film and TV series in Scandinavia, such as Anna Odells (Swedish award-winning director) film X&Y and the theme song for Swedish TV series Labyrin.

Now she has produced the series score for a new Swedish TV police series, called ‘Den tunna blå linjen’ (The Thin Blue Line). The 10-episode series – Episode 8 is being show as I write this – tells the story of the private and professional struggles of four police officers who work in the crime-ridden city of Malmö. (Yes, the same one that is home to Saga Norén from The Bridge but of course she kissed goodbye to Länskrim Malmö in the final episode, throwing her badge off the bridge to make her point, and colleague Hans already lost his head so it’s high time they found some more cops there).

(I should mention that Martin Hederos is also cr

edited as ‘artist/producer’ for this tune).

Fortunately there is no connection whatsoever to the awful British TV ‘sitcom’ series of the same title from the 1990s featuring Mr Bean.

In fact I’ve heard nothing but glowing reports about it, such as “among the best I’ve ever seen. It’s so bloody hyper-realistic; I often forget there’s a script. The acting is incredible. Most of the actors are unknown to me, and I wonder where the hell they found them.”

Hopefully, this show will be coming here soon. If BBC4 management is reading this please take the necessary action. That is the typical home to Scandi-Noir and cop dramas here in the UK and to be fair there have been many of them during the last year, from Sweden, Denmark, Norway and Iceland including a re-run of all four series of The Bridge. And we all know what the theme tune to that did to help the show get attention in the first place.

And it would be a welcome diversion from the latest one BBC is showing which started on Saturday night, the languid Finnish ‘thriller’ Man in Room 301. We need to put that one in George Orwell’s Room 101.

Incidentally, I’m sure we’ll be hearing a lot more of Irya Gmeyner.