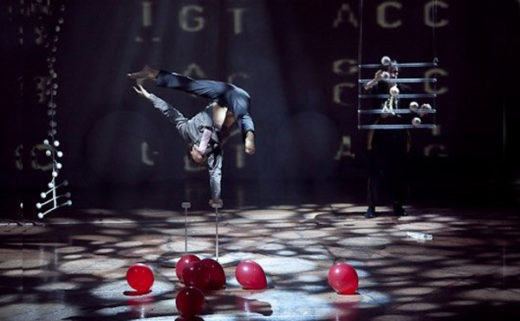 The music has immediacy and excitement

Inside Out
Peacock Theatre London
Seen: 16 October 2009
By John Ellingsworth

Within the first ten minutes two audience members have been pulled up on stage—Tom, who’s busy peddling the bike that provides the theatre’s electricity, and Saga, nervous and clutching a handbag, who’s philosophically brutalised by the ringmasterish whiteface (Does her life have any meaning? Is she really living at all?) before being left alone, on a slowly darkening stage, with the levitating corpse of a recently dead tightwire artist.

It’s very funny, thanks to the charisma of Fefe Deijfen as the whiteface and thanks to the performers who play Saga and Tom, convincing as displaced audience members for just long enough. Once we realise they’re plants the tone of the production shifts and they slip a little into the background. What Inside Out is, mostly, is a series of extremely good, fairly self-contained, fairly straight-faced, skills pieces: Anna Lagerkvist (playing Saga and having ditched her inhibitions) gives us a Chinese Pole sequence full of close-cut open drops; Angela Wand walks slowly and silently across the tops of upright bottles; Mirja Tuulikki Jauhiainen and Sanna Kopra’s fast, intricate trapeze routine has a lot of new or unusual material and a nice physical complexity in the relationship between base and flyer.

Overlaying it all, and doing more work holding the show together than the actual story, are the band Irya’s Playground, live on stage. The band have a very large sound; it’s great, and I think Cirkör make the right decisions about when to use it. The music has immediacy and excitement, but also erases close detail—so they keep silence for the bottle-walk, but as André Farstad turns the Roue Cyr the band sing ‘My Angel’ and attention rests somewhere in the warm, blurry interzone between sound and action.

Set among all this is Saga’s (Tom’s as well, but mostly Saga’s) story of being sucked into the circus and finding happiness and release, this told mostly through some quite clunky symbolism (Saga is tied by the ankle to a massive blocky heart; she has to untie herself to do some teeterboard). I’d say it’s more the sort of narrative where the story buys time and grace for the routines—which isn’t necessarily bad, but does mean the production follows a path of diminishing narrativity, so that by the end there’s space enough for an extended juggling sequence where Jay Gilligan, working with clubs and rings, is paired with the band’s drummer (the rest of Irya’s Playground having disappeared off stage), who improvises progressively weirder vocal riffs to match Jay’s patterns and catches, settling finally on just a massive, distended Metal—maybe Death Metal—roar/scream. There’s some backchat between the two and it’s relaxed enough that after a couple of failed attempts at one of the bigger tricks Jay can lean into the mic and give his own press night review: ‘The juggler kept dropping. 4 stars.’ I liked it: that the drummer and performer talked to each other, that Jay toughed out something like five failed attempts before he made his trick, and most of all that the edges of the sequence stuck out from the smooth, streamlined movement of the story itself.