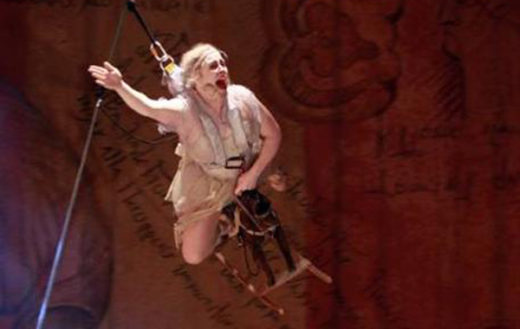 INSIDE OUT AT BAM
12 November 2009
Posted by Molly Matera

The program “Inside out” by Cirkus Cirkőr, a marvelous circus troupe from Sweden, opened at the BAM Opera House Thursday night. My friends and I were safe in our first row of the first mezzanine seats – the tall white Clown could not come all the way upstairs to get us. No, he stayed in the orchestra, pulling ordinary non-circus folk from their seats onto the stage. Or were they ordinary?

This was not a play for which the program identifies the players in some definitive way. Members of the troupe have specializations, of course, yet I regret I cannot tell you who did what. There were at least two clowns. One was a tall skinny man in white – white clothes, whiteface on his hands, arms, face, neck, and wild & crazy white Alfred Einstein hair. And acrobats. And a master juggler, a tight rope walker, trapeze artists! And, per the program, “equilibrists.” All 8 directed with loving, daring, heartfelt care by Tilde Björfors.

Accompanying and part of this troupe is a fabulous band called “Irya’s Playground,” led by Irya Gmeyner (singer) and Pange Öberg (bass). Yes, of course I bought their CD. Irya’s singing is lyrical and moody and in tune with the physical life on the stage. And the drummer (Erik Nilsson) who accompanied the mad antics of the juggler in the second half drums like an acrobat run amok. (And excellent as that juggler was, that’s my one negative note – the juggling section was a few minutes too long.)

I don’t even know how to describe “Inside out.” I was as excited as a child at her first circus, I marveled, I gasped, I cried out in dread (really!), I cheered and clapped and hooted. This is a circus story with a theme. On my way home, I read the director’s notes with pleasure, happy to continue the experience with a director’s intents proven to match the final product – now that’s a rare feat! Director Tilde Björfors likens Circus to Life.

The show had a theme of life and death inside and outside the body. The visuals immediately set us up for more than fun and games with DaVinci’s Vitruvian Man painted on the floor of the stage. (Yes, this is exactly why the mezzanine offers more than orchestra seating ever can.) This image is repeated with a large hoop put to astonishing effect by a male acrobat. Other elements of the human body – the inside, that is – are repeated on the curtains, the set pieces, in odd shapes coming to life throughout the evening.

One performer is “odd man out.” She’s an old woman, an acrobat, a comedienne. Not attractive. Not balanced literally or figuratively. Not in sync with the rest of the performers – although they put themselves in sync with her at various points in the evening. We see her journey, and that of a younger woman, in line with the stage pictures of the heart, the vena cava, blood cells red and white, and the struggles between them. Cirkus Cirkőr shows the heart literally as the pump maintaining life, in harmony with the heart metaphorically as repository of love and courage.

The White Clown is clearly the emcee, not to mention an equilibrist extraordinaire, and was bouncing around the orchestra since the audience began trailing in. The White Clown lead performers onto the stage, moved props around and connected a bicycle to cables that appeared to provide power to the lights. As the audience settled, he leapt into the aisle and pulled a man up onto the stage, tossed the poor guy’s trench coat to the floor, and put him into the bicycle. This audience member is Tom, and the White Clown makes Tom pedal to create the light. Tom became engrossed with the Clown’s balancing act on too many layers of angled chairs, and the lights went out. The Clown cries out “Tom!” piteously, and we hear an “Oh, sorry!” followed by furious pedaling until the spot comes up on the White Clown balanced on the very top chair.

The entire troupe is so on, taking part, watching, inviting the audience to marvel at their prowess, the leaps and bounds, the balancing, the joy. And occasionally the odd old woman wandered on, did something amazing, then something clumsy, and all the while the White Clown ushered her here and there solicitously. When she stumbled yet again, he caught her. Up she got to walk a tightrope on the ground, and down she went. He moved her. Lifted her arm. It flopped back down. She appeared dead.

Finally the White Clown addressed the audience talking about life and death, until he noticed someone in the aisle. He cried out to the woman, “Are you leaving?” and leapt into the house to lead her on stage. This is Christine, and the White Clown pulled her into the world of the circus people. Part of said world is, of course, make believe, and the old woman isn’t dead after all.

A marvelous scrim is painted like a circus tent, with a slit set where the tent’s flap opens and closes for exits and entrances. This simple effect made me absurdly happy. The first part is carny and fun and sets up the second part where the emerging themes come into focus. Sets are struck, dances are danced, drinking and merrymaking took place, and the old woman pulled the heart out of Christine’s chest.

Entertainment in the Interval, before the White Clown shouted, “Is anyone still in the toilet? No? Then we begin!” consisted of watching the thin white-faced man chat with members of the audience, then lead two slim men up to center stage, inviting them to sit on two chairs. Back the Clown went to the audience, house left this time, and brought up a couple. Perhaps a couple – the young man was androgynous such that only the mustache convinced me he was male − barely. The woman with him was in a short skirt and patterned stockings, and I wondered what the Clown would do that would make her outfit totally unsuitable. The Clown and the Juggler settled these two into chairs, then moved them all around. They manipulated the limbs and spines of the four audience members until they were leaning and lying on one another. Then the Clown removed each of the four chairs so the only support those people had was each other. This seemed interestingly in line with one of the evening’s themes, then the Clown gently pressed on that support system until all four were sprawled on the ground.

The stage is filled with shapes that don’t appear connected to a circus − globules, blood cells, the right atrium, nightmares come to life in the fantastic voyage inside our bodies. The inner journey is on video and onstage, blood corpuscles traveling through the veins and the vena cava, dropping onto the stage where red and white battle one another. Hearts are ripped out of chests, then carried outside in one character’s arms. Eventually the heart grows into a set piece on and in and through which the characters leap, crawl, fight and play. All this and acrobatics, too.

Director Tilde Björfors explains her study and love of circus and science by quoting DaVinci: “Art and science are two sides of the same coin, and both widen the world.” We do not see the science, but these performers do. Each prop is so carefully placed, each jump, leap, toss, so carefully balanced and safeguarded, that we cannot help but see a dedicated form to all that these performers do. This piece is scripted, each moment is judged and timed. Each magical act plays a part in expanding on the theme of the evening.

We have fears – and acrobats appear not to have them – but they can be overcome, one by one, so we can carry on and take the next step. To where? Wherever we need to go: To live more fully. To walk a tightrope. To trust your partner to catch you when you’re hanging upside down fifteen feet in the air.

This is not Cirque du Soleil; this is simpler, smaller. It does not overwhelm with lights and colors and death-defying feats. There are feats galore, and they amaze. This Cirkus is gentler, tells a story, and teaches us that the heart has many functions, and that courage is not the lack of fear, but overcoming it in order to accomplish something. The art of Cirkus Cirkőr is not to make it all look amazing, but to engage our hearts with their journeys. And they did.

I don’t know where the show is going next, but if it wanders your way, go see it. Meanwhile, check out the trailer at the company’s site for teasers galore: http://www.cirkor.se/trailer/ . Björfors says that “Circus is about life and death.” That’s how I think about theatre. Thursday night on the BAM Opera House stage, Theatre and Circus were the same.

~ Molly Matera signing off. So many somersaults to do!

PUBLISHED IN
Molly Is Musing Blogpost