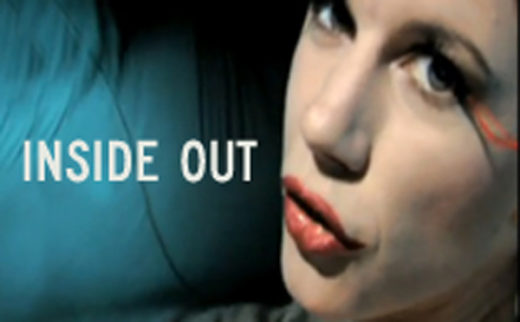 The concept of circus in a proscenium theatre grates with the received wisdom of my childhood experiences; a circus is performed in a ring with a ring-master in a long-tailed red coat and top hat.  Inside Out has a “ringmaster” in exactly this attire but Fefe Deijen is completely whitewashed (hair, clothing and skin) and also doubles as the closest that Cirkus Cirkör comes to a clown. There are no big red noses here.

The production is billed as ‘a circus show about something as simple as life’, which suggests some fusion of narrative and circus skills.   The former was hard to discern apart from the linearity in a journey of discovery for two “audience” members, a man plucked from the stalls to ride a static bicycle that supposedly powered the lighting and a woman accosted by Deijen as she appeared to leave the auditorium.   Of course, these two ordinary people (Jens Engman as Jean-Paul and Anna Lagerkvist as Christine) are gradually sucked into the crazy world of the circus and turn out to be consummate acrobats; Lagerkvist’s pole routine provided the one scream-out-loud moment as she plunged headfirst 30’ to the floor stopping herself with inches to spare with no discernible effort, simply by tightening her thigh muscles (I guess!).

The theme of the show is that everyday life is about risk, trust and courage and performing circus skills simply takes all of these to a higher level of consciousness.    Watching the two aerial artists, Miku Jauhiainen and Sanna Kopra sharing a trapeze in an act of such remarkable synchronised strength and balance, one senses the absolute faith that one must have for the other. I imagine if one performer is a split second out in their timing or wrongly positioned by a centimetre then every survival instinct in their being will want to correct the mistake and yet she has to rely entirely on the catcher to adjust.    These women are in the 12th year of their partnership and I suspect that they now think and breathe as one.

I loved the ebb and flow of the show, the baroque feel to its design and the many moments of poignancy that flowed throughout the work.    The cast included Angela Wand as a bearded, hairy and dishevelled woman (often imprisoned in a cage), wearing a tattered wedding dress and pointe shoes, and appearing like a manic cross between a Billy-goat and Dickens’ Miss Haversham mourning the bride that she never got to be.  There was plenty of humour to balance the pathos, like the lights going out at a crucial moment in Deijfen’s chair balancing routine, because Engman – still in audience-member mode – had stopped peddling the bicycle!   The ensemble also included a distinctly cool and versatile virtuoso juggler in Jay Gilligan.

Accompanying all of this excellence was an outstanding band – Irya’s Playground – which helped prove the point that Sweden is a world-leader in contemporary music. Their numbers exquisitely complimented the visual action and there was a massive queue of people buying the band’s CD at the end of the show. I loved Irya Gmeyner’s vocals – especially in the standout ‘My Angel’ ballad. The band was definitely worth watching on its own.

The word Cirkör in the company’s title is a pun on the French words for circus and heart (cirque coeur) and heart motifs figured prominently throughout the performance.    Since the heart is firmly associated with love, it was appropriate that the audience clearly loved the show. I haven’t seen such a rousing standing ovation for a very long time