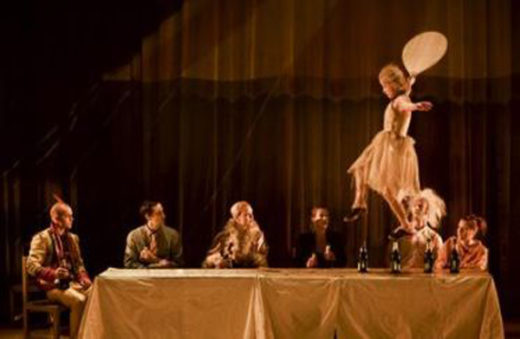 A live soundtrack act to be reckoned with.

Integral to the show’s success is Irya’s Playground, who are a live soundtrack act to be reckoned with.

Circus Cirkör describe their core values as commitment, collective individualism and quality madness. This sums up this entertaining and relatively raucous production well. Big on spit rather than polish (unlike say a Cirque du Soleil) but huge of heart, their roots feel firmly in street theatre. A big bag of familiar circus acts are done with confident theatrical bravado, a few nice visual theatre surprises, and a great propulsion live soundtrack.

To the sound of the fairground organ whirl, Inside out opens with the performers delightfully playing out well-worn archetypes (the bearded lady, the strongman, the pretty ladies in their spangly tights) with a homage to the faded sparkly glamour of the big top. There’s chair balancing, hoop jumping and plenty of clowning. Yet as the affable acrobatic ringmaster Fefe starts to pick out members of the audience to enter their world, and ruminates on life and death (“We’re scared of things we can’t control,” he tells us menacingly, “like love, death, swine flu and Facebook.”) things start to get a little darker, trippier and more interesting.

Yes, this is a show as the programme states for people aged 10 and over.

Rather successfully we find ourselves part of their circus. Like the innocents Brad and Janet entering the Rocky Horror Picture Show, we’re welcomed into a place that is full of fear and danger as well as love, the narrative playing out a journey for an audience member further and further into the centre of the heart. Utilising a series of screens, projections, flying objects and fabric the company create some magical dream spectacles.

Integral to the show’s success is Irya’s Playground, who are a live soundtrack act to be reckoned with. Their sweet pop songs are a little too inoffensive for my tastes, but they have the ability to verge off into strains of country, gypsy, dub and hip hop with lots of dynamic musical flair.

I got the impression they played a stronger role in the second act (unfortunately I couldn’t see them – don’t get tickets for seats to the far left of the stage), where the storylining gets looser and they energetically propel forward excellent displays of acrobatics and juggling. In this regard the circus skills of the company are excellent but their routines are pretty familiar. In the second half the storytelling pretty much ground to a halt.

All of which didn’t stop the Wellington crowd adoring Circus Cirkör. What endured throughout Inside out was a very big collective sense of heart and humour. They look set to keep Wellington very happy.

PUBLISHED IN
The New Zealand Herald